Japanese Sake is an alcoholic drink made of fermented rice, koji and water.

In addition to the sake breweries’ traditional technique and passions, the original flavor has been created.

There are many kind of Japanese Sake, includes,“Junmai-Shu”, which has standard level,“Honjozo-Shu”,middle level and “Ginjo-Shu”, high level.

There are also different brewing process and different styles of rice polishing.

We started to use the original sake rice, “Yui No Ka”, which has developed with our hope to surpass “Yamada Nishiki”, which is said to be the king of sake rice and well known for flavor. 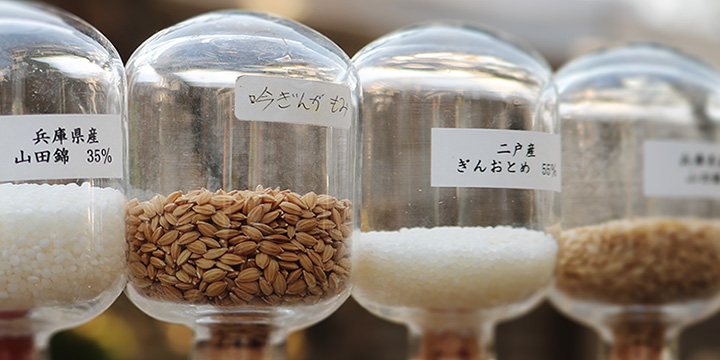 We grow the original sake rice, “Gin Ginga”, only cultivated in northern part of Iwate, Japan.

We especially contract with Kindaichi

Agricultural business association in our local farmers at Ninohe city, in Iwate, Japan.

This method of rice cultivation is specially certificated by

For making local sake, local made rice should be used. We are happy to hear that this concept is widely accepted and commit to accelerate.

Thanks to the special contracts with farmers in Takizawa city, Iwate, Japan, we can use purely original organic sake rice, “Miyama Nishiki”, under another registered brand name “Houbai”.

we hope that you can enjoy our sake served with several flavor, in the same condition of the rice Rice-polishing ratio and the sake yeast amount, but, in another condition of sake rice, including “Yamada Nishiki”, “Aiyama” and “Miyama Nishiki”. 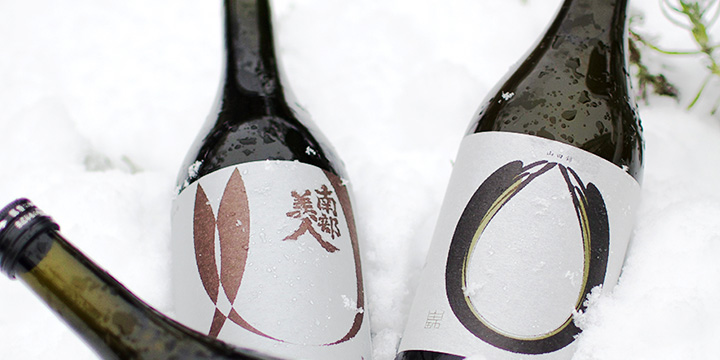 Nanbu Bijin has a pride for sake rice, because it is the origin of Sake brewing.

Once cultivated, the rice is polished to remove the bran, which includes several harmful ingredients for sake brewing, such as fats, proteins, ash-content and vitamins.

The process of rice polishing is also called “whitening”

Rice-polishing ratio for normal is about 90%, it means to get rid of only remain 10% in total.

However, the ratio for Nanbu Bijin is 70% and even 35% for DaiGinjo, our top level quality,

This works used to doing by craftsman manually and required special technique, but now, by using a computer program and we can manage the rice polishing properly.

We can improve accuracy of rice polishing ratio.

We also keep our effort for polishing rice in order to offer “Southern Beauty” with good flavor and without miscellaneous tastes.

One is to wash rice by hands using basket, it is for high level top quality, “DaiGinjo”, Rice-polishing ratio 35 to 40 %.

Another is to wash by bubbled water jetting device.

Washing by using our hands

The more thin rice is by polishing, the more fragile it becomes and it absorbs water so quickly, so hands washing is said to be better.

Bamboo used to be common for baskets, but now stainless steel baskets are widely used for basket.

Stainless baskets is good to scale the water suction rate, because in case of the bamboo baskets, a bamboo absorbs water and hard to measure the total amount of water precisely. But stainless keeps the same data without absorbing water. 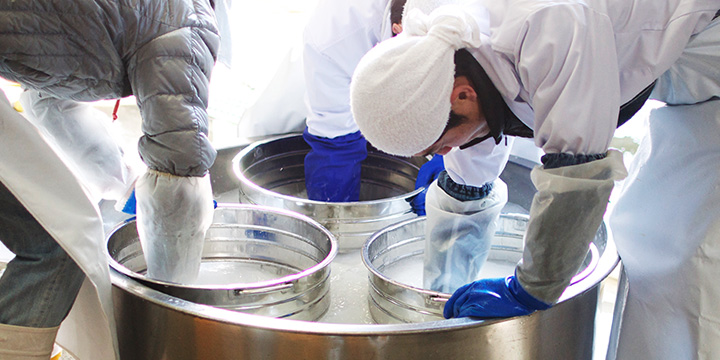 Washing rice is just washing by pouring water of the same temperature of rice in the container, called “half- cut” size container.

Three man need to wash rice at the same time in one basket with 10kg rice.

It starts to wash with the voice of start sign and gets rid of rice bran finely in one minute.

After one more minute, it pulls up from the water and rinses to wash more bran. After that, soaks it into fresh water to absorb moisture.

After the rinse, soaks into fresh water. 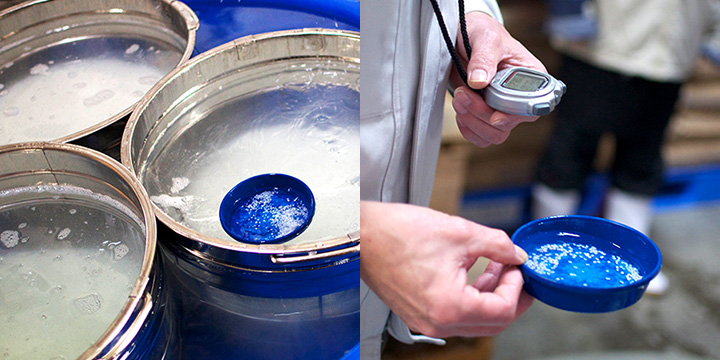 Water absorption time starts to measure at the same time when the voice of start sign hears by the stop watch.

If Rice-polishing ratio is 35 %, it requires 8 to 9 minutes, it differs under the condition, such as variety of rice, degrees of rice polishing ratio, rice itself, temperature of rice and the amount of water the rice originally has.

It is hard and important to understand these points.

However it is hard to tell in general, because depends on the conditions, such as varieties of sake yeast.

After soaks into fresh water and cuts of water, water absorption rate could be calculated by comparing with the weights b/w before and after soaks.

A color of outside rice is white due to the water absorption. 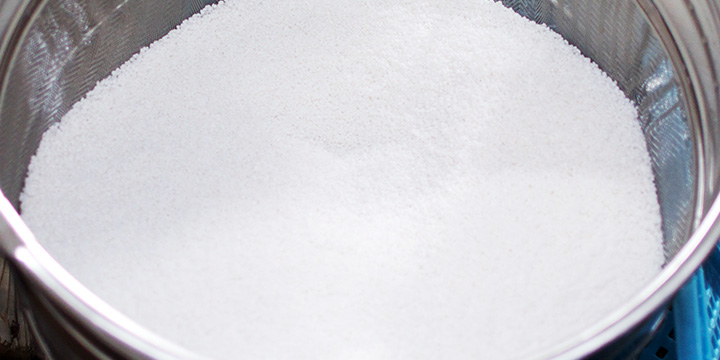 It is new way of washing rice, starts to deploy from 2011.

We have deployed this method for all sake but top level quality, “DaiGinjo”.

This method is widely deployed by famous Sake breweries in Japan, mainly in Tohoku region, it is one of the best way to wash rice.

In short explanation to be added, rice can be washed by the power of bubbled water washing device and can wash quick without harming rice.

We also think it better for all of Nanbu Bijin sake, including normal sake.

For more detail information, please see the web site below,

Sake rice needs to be steamed.

Normally we wash rice. Then, we pure water and switch on the rice cooker.

However, in case of sake rice, we wash sake rice. Then, we steamed it by using something like bamboo steamers. 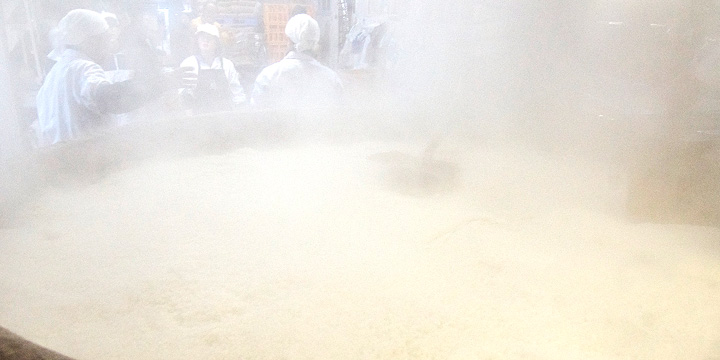 We put on the rice, called “Giji-mai”, on the bottom of steamers in order to avoid the lower levels of rice in steamer from sticking on the bottom and put on new rice again over the “Giji-mai”.

“Giji-mai” is not for edible, made of plastic. It means that it causes no bad fragrance effect for rice by washing.

Through this process, we can produce a good steamed sake rice even on the bottom of steamers.

We are putting the steamers on top of the kettle, containing water. Then boiled water and steamed with steam.

It takes about one hour after the steams end from the steamers.

One hour later, we use dedicated scope to dig up the rice.

The steamed rice has nearly 100 degrees close temperature. The way of viewing the condition of steamed rice is called “Hineri Mochi”.

twisting in the palm of the hand while taking small amount of steamed rice on hand to make a cake, we can look at the rise steamed by the condition of the rice cake.

Now we can understand the condition by using water absorption rate, but “Hineri Mai “is also indispensable.

We can totally judge the good steam condition from the scientific data, hands fearing and mouth feel from “Hineri Mai”.

The way of cooling down the rice differs according to the type of the rice. In case of rice malt for top quality, it spreads out on the floor to cool down by natural cold air.

Another types of the rice, is cooled down by the machine called cooled machines, and it was charged in the respective temperature. 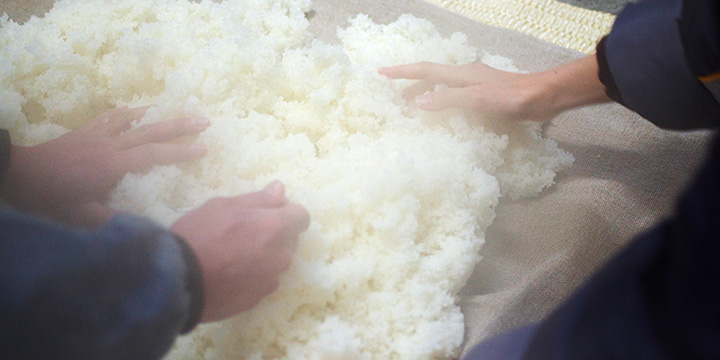 Kojimai, rice used for rice malt is cooled down to about 40 degrees,

KakeMai, rice used to produce the sake mash or unrefined sake is cooled down to about 40 degrees to 50 degrees in first.

Then it needs to be cooled down on three steps.

One step called “Zoe”, is cooled down to about 20 degrees to 30 degrees.

Second and third step called “Naka” and “TOME” respectively, is also cooled down to about 6 degrees.

Other than malted rice, the degrees needs to be cooling down depend on the conditions, including the weather or the timing of preparation.

We will explain the ideal degree in detail later in the preparation chapter.

In general, all steamed rice deliver by systems that propel cylindrical containers through networks of tubes by compressed air, called pneumatic tubes, after cooling down.

We use pneumatic tubes only for the step of “Naka” and “TOME”, as for other rice, we deliver by our hands.

The scientific reason is that rice starch β-type (before steaming) becomes α-type by applying heat.

Comparing to β- type starch,α- type starch is easily influenced by the effect of fermentation.

In short, it is not good to get power from rice malt without steaming.