The origin of Japanese sake was said to be from the Mouth Bite Sake.

Basically, sake is produced by a fermentation process, where sugar is converted into alcohol.

The yeast converts sugar into alcohol, and sugar is made from starch, contains the main ingredient of sake, rice of 80 %.

The yeast cannot make use of the starch for fermentation process as it is, because the starch in rice is hard to dissolve in water.

As for grape for wine, the yeast is ready to use with ease, because it contains a lot of sugar.

As for malt for bees is also available.

However, as for white rice, it contains no sugar in it.

Therefore, we need to put something into rice to make sugar.

As you might know, you had an experience that you can feel sweet tastes in your mouth after biting the rice in the mouth for a certain moment.

This is because an enzyme in saliva, changes rice into sugar.

Aspergillus oryzae, known as koji is exactly plays this role and an enzyme is called starch-degrading enzyme.

The origin of Japanese sake was said to be from the Mouth Bite Sake, chewing the rice in the mouth for a long time.

In this way, the yeast changes sugar to alcohol by koji and this task has carried out in the rice, at the same time.

It is called Simultaneous Saccharification.

One of reason Japanese sake can generate the highest degrees alcohol in the brew of the world, almost 18 degrees. 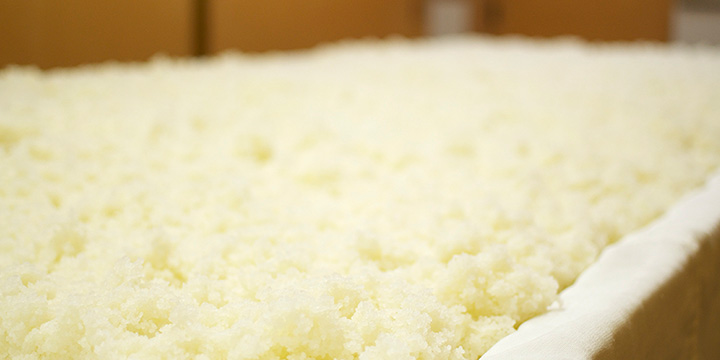 By the way, as for the way of making koji for Nanbu Bijin, the most important thing is water absorption rate.

This rate is very important process for Japanese sake to keep as exactly as possible.

The method is to soak rice into water, when rice soaks to some extents to pull up, keep all kinds of data and control the water absorption rate as much as possible.

Next, the steamed rice cools down to about 40 degrees and stores to koji room

On this koji room floor, we sprinkle the koji species onto the steamed rice spreading over the room.

Nanbu Bijin takes pride in varieties of koji and changes types of koji according to sake and yeast.

For example, DaiGinjyo, top quality, yeast is used with a gorgeous smell, such the glucoamylase glucoside bacteria and HI-G type.

For Sake with dry taste, yeast is selected with balance, such as Hikami type.

For Sake to suppress the smell, Namahineka type, IV-2 type are provided with the enzyme special seed malt, which will help to suppress the generation of the Isovaleraldehyde, said to be cause of unpleasant smell.

We started to use Reimei Hiraizumi as koji, which is the original koji developed by Iwate, Japan in 2011.

Reimei means to take a step to the unknown dawn after Tohoku earthquake disaster in 2011.

We use all local ingredients made in Iwate, Japan.

When sprinkling koji, we use a silk bag with thinner eyes than that of net, in order to purely sprinkle only mycelia.

One step is to make malt, Second is yeast mash, Third is to build.

Once the seed koji sprinkled, we must take a great care to keep 32 degrees (DaiGinjo is about 30 degrees) and to pile up like a mountain so as not to cool down.

In the evening, the koji piled up is to be mixed and stacks up one more, we need to wait for one more morning. 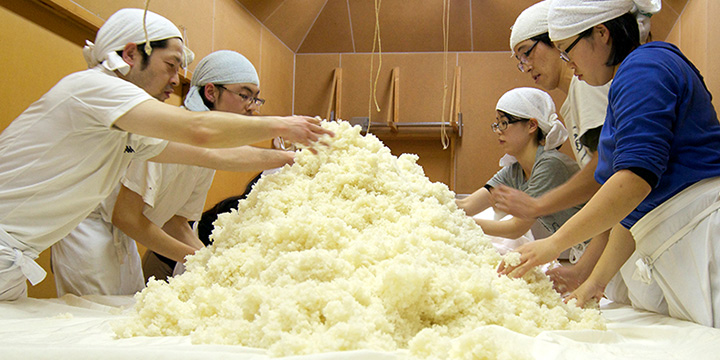 Next morning, the piled up koji, begins to appear with a small white dot in every grain.

This is koji mycelia, this is also the beginning sign of heat.

We need to separate it to prevent over-heated.

At this stage, there are two methods, according to the types of the containers,

One is called, “Oohako type”

Oohako means large box container by each about 30kg.

Koujifuta means small box container by each about 1kg

We use boxes to make Koji as well. It is middle size boxes with about 10 kg.

We use 3 types of boxes for Nanbu Bijin Sake production.

It is good for koji to be dried easily if the size of boxes is small.

It is common method for DaiGinjyo.

But, to be honest with you, it has a disadvantage.

To under control the quality of all boxes is very hard.

We cannot sleep at all to keep watching all boxes over the night. 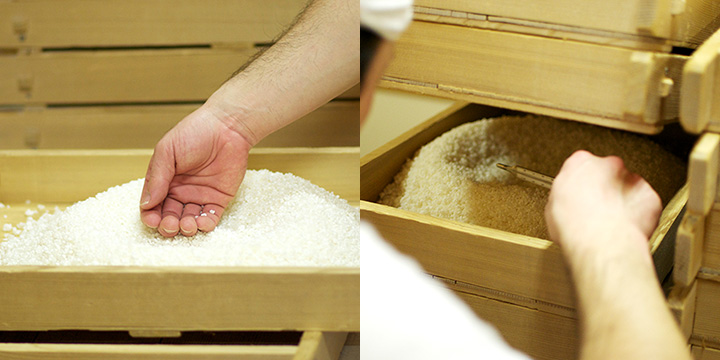 After this step, we take a special care for koji in about 36 degrees to 37 degrees.

We stir with a paddle carefully and prevent from increasing too high temperature.

If the temperature will be going up, the hyphae would extend outside of rice.

We must take great care to keep growing up the temperature gradually.

We also watch for koji mycelia to penetrate into the inside of rice.

After this step, we again take a special care to koji in about 39 degrees.

At this step, the heat from koji is expected to be higher than the room temperature.

Finally, the temperature rises up to about 43 degrees, keeping 40 degrees for more than 10 hours.

We bring koji to the drying chamber and cool down for the whole day. 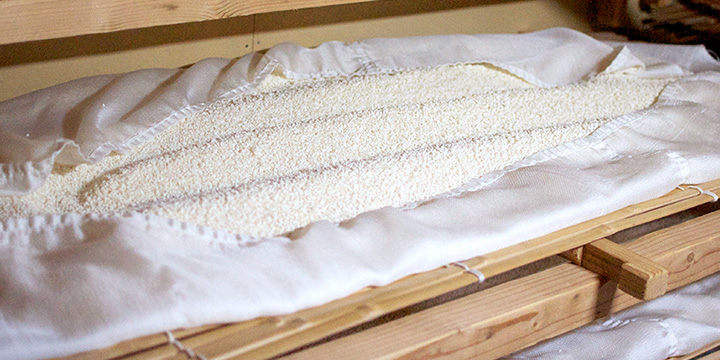 Thank you for reading this long story.

It is said that, koji in sake brewing has been considered to be the most important thing.

It is also said;

One step is to make malt, Second is yeast mash, Third is to build.

In general, it is necessary to change the starch into sugar.

In the East, our ancestors found it possible by the enzyme, produced from the mold.