In general speaking, only Eskimo and New Guinea people, don’t make an alcohol in the world.

An alcohol, sake, is important drink for human beings and has a deep relationship with us for a long time. 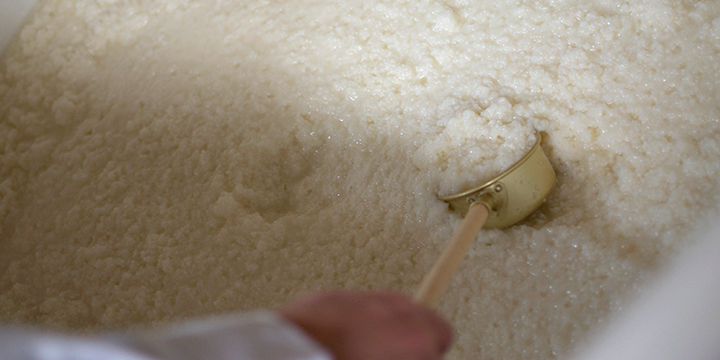 Do you know when the origin of sake?

We suppose the origin was probably when Yeast was born and

when the grapes and flowers bloomed.

We don’t know how long passed since we have drank alcohol, it is believed to be thousands of years, based on the ruins of a vase and of ancient paintings.

By the way, yeast plays leading roles in making alcohol in the world.

Yeast is a minute creature that has the power to change sugar to alcohol by fermentation.

Not only alcohol, yeast is a fungus, has a power to produce great and “Ginjo “incense, with a flavor such as an acid taste of the ingredients.

It had been known for thousands of years that mash becomes alcohol by fermentation, but people do not know the reason. We thought that it is a natural phenomenon.

It is said that the existence of a minute creature has been known at first by Antonie van Leeuwenhoek 1680, was observed by using a microscope with his self-made lens.

In the 19th century, the mechanism of fermentation was the first time to understand.

By observation, sugar was decomposed into alcohol and carbon dioxide by yeast. 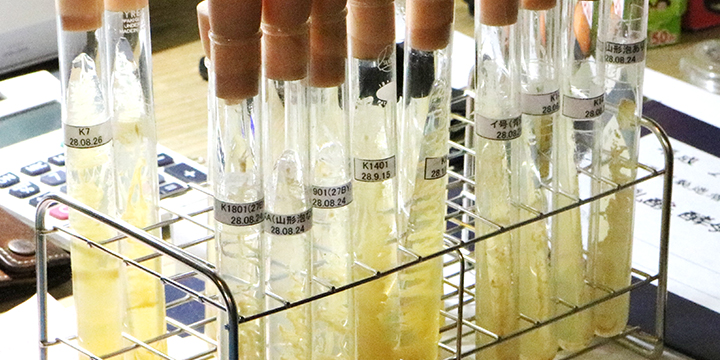 As for current sake yeast in Japan, “Association of yeast” is the mainstream.

There are various kinds of yeast is now in use, such yeast as improved by each prefecture, or yeast has been used for long time in house made.

“Feelings of Yuko” has gentle and scent, gentle taste, dedicated for the people who has passion for sake in the research and development and for you (Yu)

named after the hero of “Ginga Tetsudo no Yoru,” a story by Miyazawa Kenji.

Please see the link below for more information.

Yeast goes to say that in the mother’s belly and say in humans, yeast is the baby.

In order to grow to the yeast healthy,

Yeast is well prepared about one-tenth of mash with purely and under healthy nurture condition.

Yeast goes to say that in the mother’s belly and say in humans, yeast is the baby.

“Yamahai shubo”, was developed in the Edo era revised from the original variant, “Kimoto system shubo

This shubo has a profound acidity, because it includes a lot of microorganisms, comparing to Sokujo-shubo, using a natural lactic acid fermentation and the pure culture of yeast.

It takes as long as one month to make Shubo.

since lactic acid is used in the first, eliminating the need to work for microorganisms other than yeast.

It has a flavor without hesitation, smell good, because there is no proliferation of fungi other than yeast like Yamahai shubo.

It takes only two weeks to make Shubo.

Now, most of sake brewery uses this Sokujo-shubo, though some brewery dares to use Yamahai-shubo or Kimoto-shubo

We use Sokujo-shubo for the preparation.

In this chapter, we will explain how to make Sokujo – shubo briefly.

At first, we create some kinds of Koji, called “Mizukoji” to put the water, koji, yeast and lactic acid in the tank.

Set the temperature of 20 degrees and put the steamed rice cool down to 40 degrees in the tank.

It would crush the rice if a paddle would be used to stir, we use our own hands to stir so carefully not to crush the rice and to mix Koji and steamed rice. 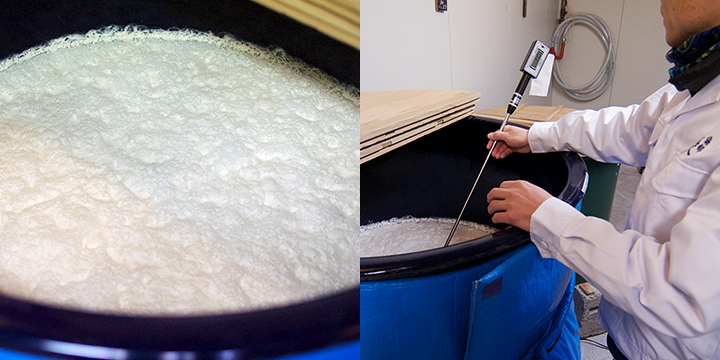 About 3 days after, little by little, it prompts the growth of saccharification and yeast to put the warm-air.

If it would fermented more, yeast will weak in reverse, so we have to cool down and dry Yeast.

It takes about two weeks to make Shubo from preparation.

Shubo is moved to a bigger tank and it becomes first addition “Hatsuzoe”. 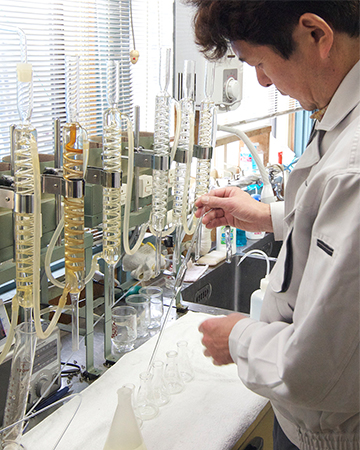 It is very important step if gets microbial contamination.

We commit to put our highest priority on keep cleaning.