The head Kuji family lived at Ichinohe, in Ninohe city, Iwate, Japan and engaged in a soy sauce brewery business. Mr. Sueta Kuji, the first brewery was established in Ninohe city and he made Japanese Sake, based on technologies of soy sauce brewery. The first production volume of sake was estimated about 7.5kg. Sake named after “friend of moat”, hiring local craftsmen in Ninohe, and the water for preparation is used from a well at our own and also at Takeuchi Shrine.

Mr.Sueta Kuji died young, Mrs.Nayo Kuji took over his business, because his son, Mr.Hideo, was too young to succeed.

Mr. Hideo Kuji, the third successor, received his draft papers while filming, and left for the front. His wife, Mrs. Minako Kuji, watched over business while Hideo were away. He belonged to the navy and rode on the boat destroyer, Hibiki, which belonged to the battleship Yamato fleet. During the pitched battle, Hibiki, was stalled at sea and had to go back to Japan.

As you might know, the group battleship Yamato fleet was totally destroyed at the end of war. He was lucky, but he didn’t tell anything about the war experience. It took time to sort out his feelings after returned home. During the war, almost everything, including sake and rice was rationed by Japanese military government. Sake was a valuable product at that time. Japanese people ate mainly potato and Sweet potato. After the war, because the control by General Headquarters of the Supreme Commander for the Allied Powers was followed, at that time. The carpenters needed to pay the earnings for a week, was also unable to buy 1800cc sake. 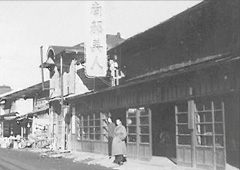 Thanks to Tax Office director in Ninohe city’s advice, the sake was named as Nanbu Bijin, linked with the taste of sake to the “Bijin” and the location of “Nanbu”

Japanese sake was sold the best from 1965 to 1975.Japanese overall economic situation was developed from the timing of Tokyo Olympic Games of 1964, with TVs and electric devices coming into wide use.

However, we had to compete with large sake brewers under the same price level due to the liberalization of sake price. We had to fight against the large sake brewers, which could conduct the campaign on TV and Radio. Even the whiskey came to be sold at the small Japanese style restaurant, Yakitori-ya, Sushi stand stall, after 1975. It was getting harder for local sake brewer to compete.

All of a sudden, a turning point was the day in 1981. Mr., Koizumi, who was president of Koizumi Co., Ltd, located in Tokyo, made a telephone call. He said that he was looking for the local company to make a good sake and based on the recommendation of president of Dewazakura in Yamagata, he would like to make a deal with us in Iwate region. Mr.Koizumi had visited our office the very next day from his first phone call and he tested the quality of our sake by himself. 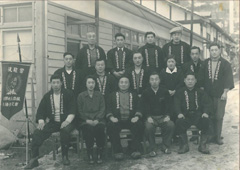 Mr.Koizumi had a business plan to sell the specially designated sake, which was selected only one brewery with enthusiasm from each region. He also wanted to keep good communication with local breweries.

Mr.Kosuke Kuji, now our president, joined the company after graduation from Tokyo University of Agriculture, when the sales of “Southern Beauty” was spread to the whole country under the corroboration of Koizumi Ltd. Mr.Hiroshi Kuji, our chairman, was Senior Managing Director at that time. Mr.Kosuke started to make Japanese sake with Mr.Yamaguchi, was fine and alive at that time and also began to sell it. Though there was generation gap between the grandfather and grandson, however, they began to challenge new sake with their passion for sake together.

We started to study the business opportunity

We started to study the business opportunity in Japanese sake’s overseas exports, because we felt the number of Japanese people who drunk sake was decreasing. We contributed to establish SEA, Sake Export Association and activities to appeal exporting Japanese sake. 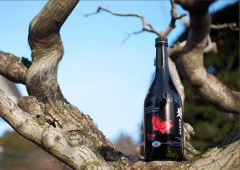 At first, the amount of sake export was as minimum as 12 bottles of 720ml, 6 sho-bottles. We visited the shops several times to let them understood our activities toward Japanese Sake making. Now, we can say it was the period for us to make foundations for overseas exports.

In this year, Mr.Hiroshi Kuji, the forth successor, became president of Nanbu Bijin Co Ltd, formerly known as Kuji Shuzo. 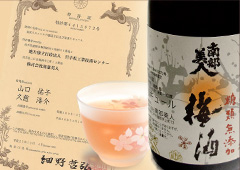 We acquired the necessary licenses and began to make liqueurs from our sake brew, according to the modification on Japanese liquor tax law. We also began to make “Sugar additive-free” plum wine, based on our malt charged technology. The material of plum is used form Kuroishi Umenosato at Esashi , Oshu city in Iwate, Japan. We carefully take off each calyx of plum and make “Sugar additive-free” plum wine with refreshing sweetness of the malt-specific flavor.

In 2009, we got a patent for the production method of plum wine, (Japanese Patent No. 4415072) We have also supported from Iwate Industrial Research Institute, Kuroishi Umenosato and Agricultural cooperative association of Sin-Iwate and Agriculture. We have certified as a commerce-agriculture cooperation activity by Japanese government.

Built a new factory for liqueurs 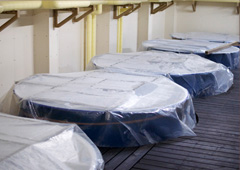 We built a new factory at Ninohe city Industrial Park to make liqueurs using the locally produced fruit and began operation in 2010. The features of liqueur are based on the fruit’s flavor itself, using Blueberry and showak flops (Strawberry), produced in Ninohe city, a small citrus fruit, produced in Rikuzentakata city, and Ofunato city.We have kept our efforts to make our original sake available with ideas and hope for any situation in our customer’s life.

In 2012, we started to build large factory at Ninohe city and we were able to offer further increase in production.

Mr. Kosuke Kuji became the 5th president in 2013. We make our effort to improve new technology of Japanese Sake. Our commitment to push forward all employees in order to broaden the possibilities of liqueurs.