The preparation of fermentation mash of sake requires three-step.

Usually, to prepare the fermentation mash of sake, koji , sake rice except for koji making and water are put into the tank.

The amount of rice is gradually increased for this three step preparation. 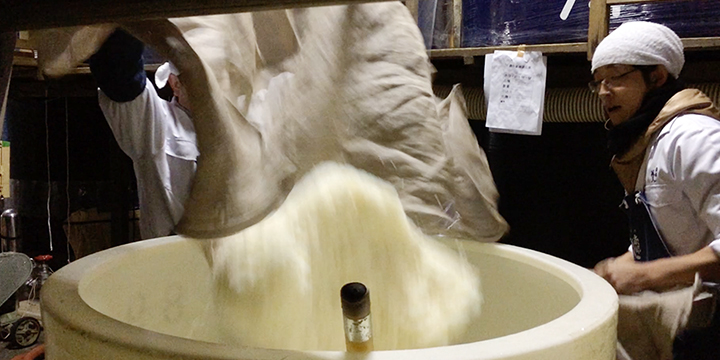 For example. Total amount of preparation is 700 kg, it includes as follows;

The preparation temperature needs to keep about 13 degrees for Soe , first addition,

About 8 degrees for Naka, second addition

About 6 degrees for Tome, third addition

It will set up gradually with lowering the temperature.

It will take about 7 to 10 days to reach the highest temperature, from 10 to 13 degrees, after tome stage.

Now, you might understand that Japanese sake is required to prepare in cold winter only, because it need to be fermented under the cold condition.

The highest temperature is about 10 degrees for

But the temperature is about 12 to 13 degrees for;

Junmai, pure-rice sake, made only from rice and rice Koji (without addition of brewers alcohol)

We think it is best to maximize the taste of the rice to sake making.

DaiGinjo is fermented in one of the limit of life or about to dead for the yeast, so it turned out to have a fruity aroma.

The status without bubble is called “Ji”.

All we have to do is only one stir in the morning.

It would spill from the tank and foams come out of the tank, we have to put the shade on the tank not to spread the foams

We use the anti-foam machine to hold the foams to come up.

Now, the yeast without foams can be used recently, however, our sake brewery workers are so young that they do not have much experience.

To tell the truth, it requires much effort to prepare for the shade for foams, it has become obsolete gradually to use the yeast with foams. 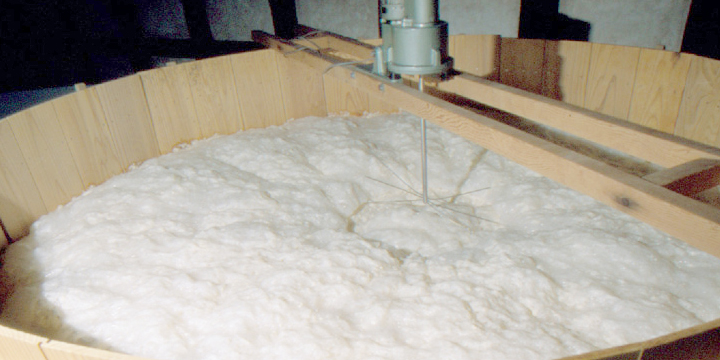 After 15th day from Tome, third addition, fermentation will have progressed so we need to cool down the temperature little by little.

Cold water through on the mat covered around the tank is a way to cool down the temperature of the fermentation mash.

It will take 7 days to cool down the temperature from 10 degrees to 6 degrees to hold the progress of mush fermentation.

During the 30 days of fermentation period, for DaiGinjo ,we take a small amount of fermentation mash each day, and analyse the sake degree, acidity, amino acid level, and alcohol,

For Junmai and Honjozo, we take one fermentation mash every two days and analyse.

In this long tasks, it takes almost 30 days to make Japanese sake.

We want to draw the original rice flavor and aroma by cold and long fermentation.

Now, finish the fermentation process, we will go to next step, compressing or squeezing.